As a young girl, I had my share of “celebrity crushes”. This is one of my more embarrassing crushes, and an eye into the mind of a ridiculous teenage girl. It also give you an idea of the types of stories I will be telling in this section.

I was WAY ahead of the Mike Myers curve. In 1989, Mike Myers was just a lowly featured performer on Saturday Night Live, and I was a 16 year old student of all things comedy. I had some high standards, too. My favorite people were the funny ones. And you better bring it. My friends and I did not fool around in the comedy department! Of course, at 16, while I kind of wished I was, I was not out partying… it was too hard to battle my mom on such things, what with the somewhat recent separation of my parents. But who cared that much, anyway? I loved watching SNL! I saw the first Wayne’s World and that was IT. They ran it in the last half hour- the time slot of the show where they tried out new things. I said to my mom (who is also a huge SNL fan- watches more than I do these days!), “This guy is SO FUNNY!”  I commented, “NO… SERIOUSLY… this guy has people my age DOWN!” It was very much the same reaction I had to the first Beavis and Butthead episode. I knew it immediately. “This is a hit!”

So I watched Mike Myers for a few weeks, noticing him in other skits, as if I was a talent scout. I needed to see what other tricks he had up his sleeve. Then I remember thinking, “Hey, he’s kinda cute.” Funny, cute? Ok, you’ve got my attention. Then, it hit me like a ton of bricks. He was the featured “celebrity” in the Washington Post insert, “Parade Magazine”. Oh, forget it. I was in love. So much so, that I’d imagine running into him in various places. Our longtime friends, the Petersons (Chris, Faye and Michael) had to go to San Francisco for a business trip for Faye. Whenever they’d go on trips, they’d bring me. Chris was an only child, and we were “besties”, it was pretty much just a given. But this was a BIG one. It involved a plane, and going all the way to the other side of the country.

I was SO CONVINCED I was going to meet Mike Myers on this trip. I just can’t tell you how convinced. Absolutely certain. This is the silliness that goes through even the most grounded teenage girl.  I wore my cutest outfit, did my hair up all 80’s-like. I knew that even though I was underage, he would see my comedy genius and wouldn’t care. (I like that I gave myself comedy props- but it wouldn’t be because I was a cute little blond girl!) We were practically meant for each other. We just WERE. I felt it deep in my teenage soul.

Anyway… the trip did not turn out as expected. Of course, Mike Myers was nowhere to be found, and believe me, I was looking. I don’t know what I was thinking. I mean, SNL is in New York. Why did I think he was going to be on a plane from DC to San Francisco?? Oh, the young, foolish girl thought-process at it’s best. As it turns out, they only funny thing Chris and I had seen were fatigued air-travelers.

We’d never seen people so unabashedly HUMAN. You know what I mean, I’m sure-  those people who are so travel-worn, they don’t care what they look like.  Sleeping with their mouths open on the floor…. snoring in public…. it was a regular laugh-riot.

Of course, being us, we were in for a heavy dose of instant KARMA. Just add water! 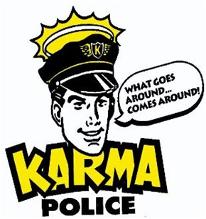 Starting out, everything was fine. My first plane ride- flying was fun!! Sure, Mike Myers wasn’t on THIS leg of the journey, but certainly when we stopped for our layover in Detroit, there was always hope. As the plane descended, Chris and I got more and more uncomfortable. We turned to each other, “Do you your ears hurt? OW…. YES…. OUR EARS ARE BLEEEEDING!!! MAKE IT STOP, MAKE IT STOP!!!” I went from full hearing to completely screwed in 5 minutes. Chris too. It was unbelievable. We ended up getting our connector flight, walking through the airport with our heads sideways, and backways, anyway to stop this crazy deafness. Nothing worked, and we looked NUTS, I’m sure. We were already one of those travel-weary weirdos (band name) and we did not like it one bit. I remember hoping we WOULDN’T run into Mike Myers in that state!

We boarded the plane and got back up in the air. Magically our ears were fixed! We could hear again! Thank goodness THAT was over! Oh wait, we’re descending again… Holy Mother of God. We were absolutely screaming. I prayed the plane would go down! (TWSS! Mike Myers joke, btw.)  The stewardesses were trying everything, throwing gum and steamed cloths at us hand over fist. Ughhh. I was deaf for 2 days in San Francisco until we took a little day trip up a mountain. Suddenly, magically, I could hear again! Oh, THANK GOD. Chris had already recovered, but my ear cloggage was really hanging on. But then, again, here we come down the mountain. We ended up going straight to a clinic, as I was screaming again. It was SO HORRIBLE. The doctor took one look and was like, “Yeah, your ear canal and eardrums are so swollen, it’s like they are imploding.” It was all pressure related. He gave me some tips for the ride home in a few days and put me on meds (including codeine- something I’d never tried before- whole other story). So I was feeling better, but still pretty deaf. Chris and I went out exploring and thought it would be a good idea to get a “California Sun Tan”. Ok, for anyone who’s seen my milky-white skin… TWENTY MINUTES in the California sun and I looked like a friggin’ lobster. People were stopping me on the street it was so bad. “Your FACE!” they’d say. “Wha?? I can’t really HEAR YOU.” What a disaster. All that and I’d long given up on Mike Myers. Who wants to see him in this state, anyway. Maybe some other time, Mikey.

So it was finally time to go home. The doctor gave me some tips that might alleviate the pressure on descent. It was “better”, but not great by any stretch. I ended up getting home, and then being immediately taken to the MD Board of Elections annual meeting with my mom. Little did I know that I would meet a celebrity after all.  Jesse Jackson was speaking and afterwards I was introduced to him. He really was such a great speaker, I couldn’t wait to vote. He actually got me a little fired up! So when I was introduced to him, I held out my hand and smiled. He shook and and then went in for the kill. Did I give him a green light? Jesse Jackson leaned down kissed me right on the lips. At 16. Right in front of my mom. I was kind of shocked but somehow pretended immediately that it didn’t even happen. But then I saw him lean down to my 3 year old sister, Mary, and kiss HER on the lips.  I remember thinking, “Maybe that’s his thing? Super weird.”

In the end, I did not meet (and have not, to date) my Mike Myers. I just ended up all deaf and sunburned and getting kissed on the lips by Jesse Jackson. If there is one lesson to be learned, don’t laugh at travel weary people in an airport!