My dreams have been nothing short of pretty amazing for as long as I can remember. They have always been vivid, colorful and realistic, and I’ve always been able to remember them in great detail. Pregnancy has only enhanced all of that. The only difference is that my dreams, especially in the 1st trimester, didn’t really have much to do with me. Going to sleep was like watching action movies all night, with a cast of character of oddball “dream people”. I should have been writing them down, but really, I had no energy upon waking after all the action. 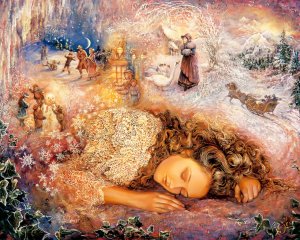 In the last  few weeks, I’ve been getting my dreams back to myself. Of course, they are back to their own zaniness and very realistic. Just last week I dreamed that the baby was coming. I was in the hospital and my OB was there. For some reason I was calling her by her first name, which I definitely do not do, and I was telling her, “He’s coming out…. I think he’s coming out!” She was still washing up, “I’m coming, I’m coming!” For some reason I had this blue towel wrapped around me, and sure enough, something was moving inside it. She opened the towel, “Well how about that! Here he is!”  I looked down to see what he looked like.

He was a Wooden Puppet Boy. Not unlike Pinocchio.

He was moving around a little, but he was a Wooden Puppet Boy. I said, “Is he SUPPOSED to look like this? She assured me it was TOTALLY normal. Even “dream me” wasn’t buying it. Thank goodness I woke up, because really, it was kind of terrifying.

Now, I know that this means that I’ve still not come to terms with the realness of this whole thing. It’s all very hard to wrap my brain around. It all happens so gradually. At first, before I could feel him, it wasn’t real at all.  The baby got bigger and bigger, moving around and whatnot, which definitely makes it much more real than no movement,  but I don’t think it will be totally real to me until I see him with my own eyes.

I told my OB about the Wooden Puppet Boy dream at my appointment following the dream. She died laughing. I said, “Hopefully it will be a real live boy, and not a puppet!”

All I know is that I ache all over. Every moment of every day. My feet are permanently swollen and feel bruised, my sciatic nerve is in full effect, my ribs- ouch. The very fact that I’m carrying 25-30 extra pound in one concentrated spot is insane to me. I suppose my body is holding up pretty well, considering. I know it could be worse. But bending is pretty much over. Climbing my stairs at home (granted, they are the steepest stairs of all time) is becoming harder with every passing day. I don’t like feeling like I’m in a weakened condition.

And meanwhile, little Patrick is in there doing his own thing. Making more room for himself, regardless. He has no idea that his feet don’t belong underneath my ribs, so I can’t hold it against him. He’s just doing what he’s supposed to be doing, and really, I’m thankful for that.

So a few days ago, I had another dream. I had the baby and he was, in fact, a real, live boy. He was very cute and I even got to see a fast-forward of him when he was little older. He was only about a year, but he was talking (I wish I could remember what he was saying!).  Upon waking, it did make it a little more real. I’m glad I didn’t end on the note of Wooden Puppet Boy before actually going into labor. I can’t say I wouldn’t be a little worried at that moment when they announce the baby. “It’s a………puppet!” (Somebody wake me up!)